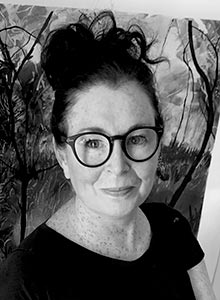 Maxine graduated from Glasgow College of Building and Printing with a diploma in illustration and print making in 1996, in subsequent years exhibited, and was highly commended, in various group shows both in Scotland and SE England.

After working on business development and training in the publishing industry for a number of years in London she moved to Australia, and the Mornington Peninsula, in 2010.

Maxine rediscovered painting, drawing and printmaking around that time, focusing mainly on the landscape and people of her adopted home. She now works as a full-time artist.

She principally works with paint on canvas, finding hidden new aspects of the Peninsula landscape, viewing the natural coastal beauty through the curtain that nature provides – being careful not to disturb its performance.

Also with mixed media approaches on various papers, initially destabilising the media then creating random and surprising effects before finally taking control back, like the unexpected effects nature has on disruptive human-made structures.

Maxine has a growing list of patrons, was recently finalist in the SBS Portrait and Landscape awards and received a highly commended in the Peninsula Green Wedge competition.

Her first solo show ‘This Is Me Since Yesterday’ ran in September 2020 at the Cook Street Collective.

In January of this year she was awarded Best in Show at the Sorrento Art Show for her acrylic seascape ‘Sorcha’ (see Maxine’s gallery).

Beginning in Term 1 2022, Maxine will be tutoring children and teenagers at Peninsula Arts through an exciting new program she calls UPSTART.

Maxine’s UPSTART philosophy for nurturing creativity in kids and teenagers is based around 5 key principles, adapted from Mark Rothko’s kids classes in the 1940’s, and still as relevant today.

Art is a universal form of expression
Just as kids can quickly pick up stories or songs, they can easily turn what they see and imagine into art.

Free creativity
With parameters that are too strict natural creativity can quickly turn to conformity.

Inspire with modern art
Kids can learn more from works that are similar to their own, the paintings of Matisse or Picasso are pure forms of visual expression.

Maxine has co-ordinated the PAS Saturday life drawing class for a number of years and holds a Victorian Government Working with Children card.